Last month I had the great pleasure of sharing a blog post about Nicholas Sharkey, an amazing 13 year-old who participated with graduate students and professionals in an online workshop of mine and developed his own pipelined RISC-V CPU core — an amazing feat for an 8th grader!

Well, now, a month later, we just offered the workshop again and…

I kinda feared when I posted about Nicholas that folks might get the wrong idea about the workshop. In fact, we had a second 12-year-old in this recent workshop as well. Yikes!

These two 12-year-olds were less active in the chat than Nicholas had been, and I figured they would quietly drop off–and that would be for the best. But Niel checked in a few times with the mentors and kept at it, and, shortly after the official close of the workshop:

(The other 12-year-old did code up a calculator circuit with some help from his mom, and was happy to save the rest for another time, which I’d consider a success in itself.)

To be honest, I was assuming at this point that Niel was getting a heavy dose of assistance, or he was actually a college student with a mischievous sense of humor, or he copied his solutions. But I followed up with him, and even put him on the spot to code some TL-Verilog logic while I watched. He freely admitted that he didn’t fully understand everything, like PC redirects, and he had to rely a bit heavily on the reference circuits we provided, but it was clear to me that he did, in fact, learn a good bit about RISC-V and circuit design and could develop basic circuits at makerchip.com on his own.

His father, Calvin, was kind enough to speak with me as well about his son’s experience. 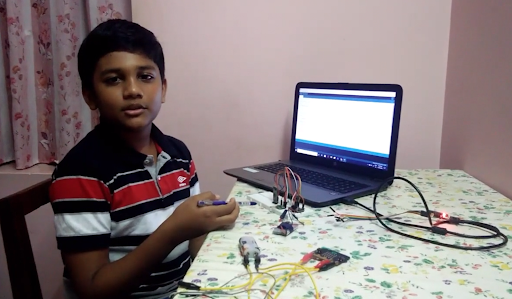 “We didn’t know if he could complete the course, but we decided it wouldn’t hurt to give it a try. He has a real interest in hardware and software.” Niel tells me he enjoys coding, video games, and playing and composing on the piano. And he enjoys getting friends involved in his technical projects… when they are willing. “What kind of projects?” I asked. Arduino, Micro Bit, breadboards, drones, Linux, and more, it turns out, and you can even watch Niel’s training videos that he posts to help others with these technologies! Last year he was awarded first place for his “Smart Irrigation System” in the Young Innovator Design Challenge organized by NXP India.

Niel sat next to his father throughout the workshop while his father did his own work as a software engineer for NXP and while his cousins provided a tempting distraction playing next to them. But Niel remained focused, and I’m happy to report that he has had a rejuvenating amount of play time with them since the workshop.

I look forward to the day when Niel and Nicholas are on the job market. Please help me celebrate their accomplishments with likes and shares and an extra scoop of ice cream.

Here are a few related links:

Lastly, I must emphasize once again, for my own sake, that the MYTH workshop is not designed for middle schoolers. Please let them grow up at their own pace, and follow me on linkedin for future courses that might be more appropriate as the technology continues to make circuit design more accessible (as well as increasingly powerful for industry).