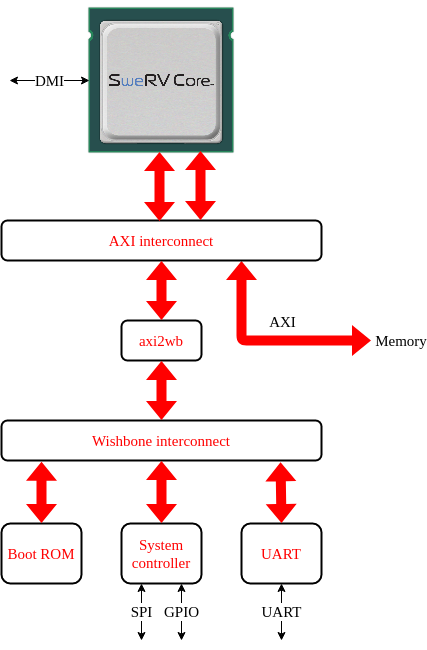 One of the main FOSSi projects I’ve been running the last couple of years is SweRVolf, a FuseSoC-based reference platform for Western Digital’s family of RISC-V cores collectively called SweRV. I have written about SweRVolf before (e.g. here and here) so I won’t go too much into details other than noting that it was created to provide an easy way to get started with the SweRV cores for both software and hardware developers and be simple enough to grasp for aspiring engineers while still providing enough flexibility to be expanded for advanced use-cases. And it seems to have hit these goals well enough, because Imagination chose to use SweRVolf as a base for their RISC-V-based computer architecture course called RVFPGA. This means that tens of thousands of students will soon get their first contact with RISC-V, open source silicon and computer architecture through SweRVolf. And this in turn means that SweRVolf needs to be rock solid and provide the necessary features to be used in this context. Fortunately, both Imagination and Western Digital are putting their money where their mouths are and have sponsored the development of several features that have been deemed important for using SweRVolf in an educational context.

Most of these extra features as well as some other work have now been implemented which means it’s time to do another release of SweRVolf, this time called 0.7.4. If you’re impatient you can find pre-built FPGA bitstreams here and try it out right away, but for those of you with a little more time, let’s dig into the changes since the last version.

In addition to official support for ModelSim/QuestaSim and Verilator, SweRVolf can now also be simulated with Vivado XSim (versions 2020.1 and later). While the former are still recommended for performance reasons, having XSim as an option is useful, especially if Vivado is already used for building an FPGA version of SwerVolf. Please note that these are only the officially supported simulators, but there has been successful reports of using other simulators such as xcelium or Riviera Pro

When SweRV was announced in 2018 the family consisted of SweRV EH1, with other versions coming later. And in early 2020 the EL2 and EH2 variants were released, providing smaller and higher performance options. Of these two versions, adding support for EL2 has been the most requested feature, not least from RVFPGA to optionally allow using lower-cost hardware by selecting a simpler CPU. And in this version the support for EL2 has been finalized. Most of the work has been to provide infrastructure and abstractions both in software and hardware to easily switch between EH1 and EL2 in simulation and FPGA builds. One notable difference is that EH1 can run at 50MHz on the supported FPGA targets while EL2 only runs at 25. By adding hardware support for reporting such differences and making the software aware, most of them can be made transparent for users.

For targets that support both EH1 and EL2, EH1 will remain the default but EL2 can be used by providing the option –flag=cpu_el2 on the FuseSoC command-line, such as fusesoc run –target=nexys_a7 –flag=cpu_el2 swervolf

The Zephyr-based demo application is intended both as a quick self-test to show that things are working as intended as well as providing an example of how to use some of the functionality found in SweRVolf. This application has been updated to showcase some of the new features of the latest SweRVolf release such as printing out the CPU type and the runtime-detected clock frequency of the system

Zephyr RTOS is the recommended realtime operating system for SwerVolf and the SweRVolf-specific support functionality (BSP) is occasionally updated to catch up with the latest Zephyr version. This version will not support a newer Zephyr release but instead stays at 2.4. There is however added functionality to handle runtime-detection of system clock frequency, made necessary by the introduction of EL2 mentioned above. This functionality allows having the same UART baud rate and timer frequency across different system clock frequencies

The 32 upper GPIO have been moved on the memory map from 0x80001014 to 0x80001018 to allow space for a GPIO direction word adjacent to each 32-bit GPIO bank. This is one of the rare cases of changing the hardware to simplify software. More specifically, creating a 64-bit GPIO driver in Zephyr turned out to be far more complicated than expected. And since the upper 32 GPIO have not been used in any known SweRVolf implementation it was considered safe to move them, reserving space for a pin direction word to be implemented later.

SweRVolf was originally created for the Digilent Nexys A7 board as that was identified as a popular board for a reasonable price with enough I/O and a large enough FPGA for SweRVolf. But it is by no means the cheapest option so SweRVolf has now also been ported to the Digilent Basys3 board which is about half the price. This is also a board that is very popular, not least in universities which hopefully means that a lot more people can get access to SweRVolf this way. And SweRVolf was created to be portable so hopefully the new board support can serve as a template to add support for even more boards in the future.The smaller size of the FPGA on the Basys3 board however only allows for SweRV EL2, not SweRV EH1

Apart from adding a chapter describing the Basys3 support, an error in the boot switch arrangements was found and corrected for the Nexys A7 target. A link to a port of the Tock OS has also been added together with a link the the project page on LibreCores. And if you are using SweRVolf in any way and would like the world to know, please let me know and I’ll add it to the documentation.

As for the future there is at least one interesting feature in the works that I hope to share soon. Until then, have fun with SweRVolf 0.7.4. Sounds pretty fun, doesn’t it?