In 2021, we announced the first availability of Ubuntu running on RISC-V processors and hardware. However, the endeavor didn’t stop. Now we are proud to announce the Ubuntu release for another piece of RISC-V hardware: StarFive’s VisionFive board.

In the last decade, open source and open standards have reshaped our world. Such technologies have produced long-lasting results, and the RISC-V consortium has extended open source to develop a standard open-source processor architecture. The release of RISC-V to the open community marked the first time the hardware community embraced open-source standards and collaboration at this level.

This free and open Instruction Set Architecture (ISA) can enable a new era of processor innovation through open-standard collaboration with rapid industry-wide adoption. The RISC-V ISA delivers a new level of free, extensible software and hardware freedom on architecture. The architecture can be applied to a broad range of processors, from low-end microcontrollers to high-end server-grade processors.

StarFive, a leader and promoter of RISC-V technology and ecosystem

VisionFive, the first generation of cost-effective RISC-V single-board computers, is designed to run Linux, with StarFive’s JH7100 vision processing SoC. The JH7100 SoC is equipped with a 64-bit high-performance RISC-V dual-core processor with a 2 MB L2 Cache and running at 1.0 GHz, which is excellent for high-performance computing. Compared with other RISC-V development boards, VisionFive is high performing, affordable, and easy to use. It is equipped with 8 GB RAM, 40-pin GPIO header, and end-to-end hardware and software infrastructure, which make it convenient and flexible for developers to configure and deploy peripherals, and to build a dedicated application environment. 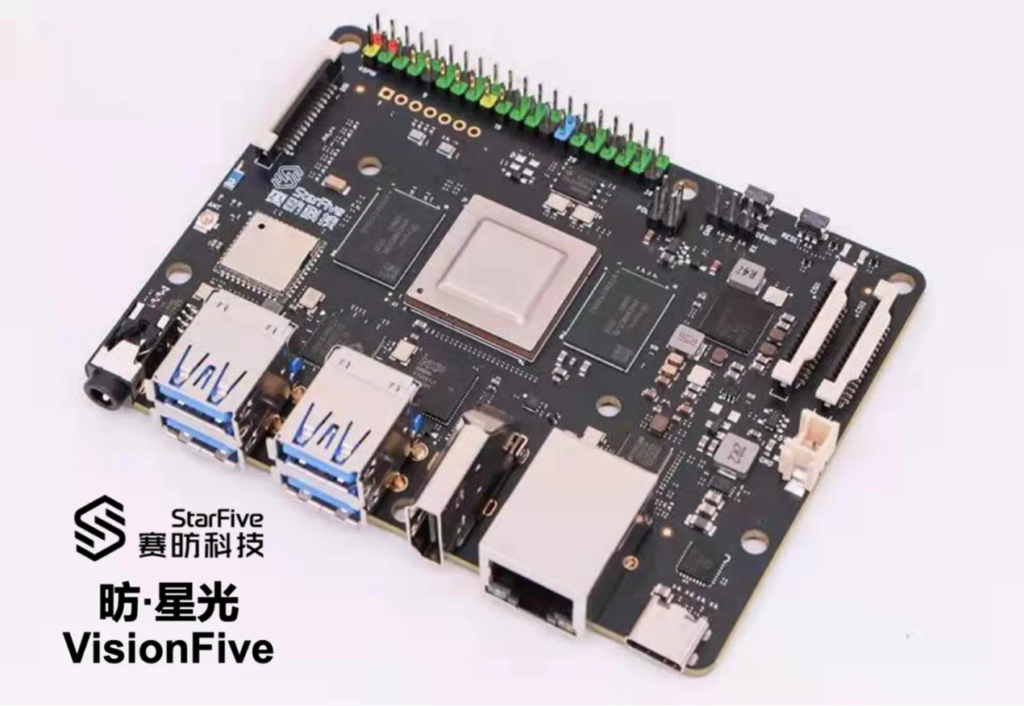 While RISC-V enables stable reference architectures and hardware, running stable software on new boards can still be challenging. The cornerstone of the necessary software is the underlying Operating System (OS), which provides reliability and stability. This demand makes development on Linux even more attractive, since Linux is the most popular OS for developers and hobbyists, across kernel, drivers, and distributions.

At Canonical, we believe that open source is the best way to accelerate innovation. It motivates us to enable a wide range of open source communities under the Ubuntu umbrella. However, open source software comes with its own set of challenges. Canonical aims to position Ubuntu as not just the reference OS for innovators and developers, but also as the vehicle to enable them to take their products to market faster by letting them focus on their core application without having to worry about the stability of the underlying frameworks.

RISC-V has a lot of potential and is becoming a competitive ISA in multiple markets. With this premise in mind, porting Ubuntu to RISC-V to become the reference OS for early adopters was the natural choice.

“VisionFive is designed to meet the huge demand and high expectation for RISC-V development boards from the industry,” said Thomas Xu, StarFive Founder and CEO. “We are excited to have Ubuntu successfully running on VisionFive, thanks to Canonical. The operating system is key to RISC-V high performance applications. Dedicated to promoting RISC-V ecosystem development, StarFive will make further contributions to the open-source world with Canonical.”

Ubuntu, backed by Canonical, provides a commercial-grade Linux distribution that is also free to use by innovators and developers. ”Ubuntu is the most popular open source operating system, and we are thrilled to be expanding support for the RISC-V open source community.” said Cindy Goldberg, Vice President of Silicon Alliance at Canonical.

“Canonical and StarFive are partnering  to create an enterprise-grade Ubuntu image for the new VisionFive board, bringing open source software and open source hardware together for developers to build a broad range of computer vision applications at the edge. I can’t wait to see what developers are going to build with this VisionFive board and Ubuntu.“

An Ubuntu image is now available for StarFive’s VisionFive board, and more work is expected to include new features and a port to the latest Ubuntu releases.

StarFive will showcase Ubuntu running on the VisionFive board during the RISC-V China summit. If you would like a preview, please check out StarFive’s demo during the event and visit here for more information.

For guidance and discussion on the images and the best ways to install them, please use the Ubuntu discourse under the documentation itself so everyone can benefit from your experience.

Canonical is the publisher of  Ubuntu, the leading OS for container, cloud, and hyperscale computing. Ubuntu is the OS for most public cloud workloads as well as the emerging categories of smart gateways, self-driving cars and advanced robots. Canonical provides enterprise security, support, and services to commercial users of Ubuntu. Established in 2004, Canonical is a privately held company.

Founded in 2018, StarFive is a Chinese high-tech company with independent intellectual property rights, providing world-leading and RISC-V based products including CPU IP, SoC, and development boards, etc. Also, StarFive is the leader of RISC-V technology and ecosystem development in China.