“The VisionFive 2 is an impressive high-performance RISC-V single board computer (SBC) withnGPU.  This level of performance and capability is a perfect showcase of the rapid innovation and production of RISC-V computing.” Said Calista Redmond, CEO, RISC-V International. “Further, the announced JH7110 is a great edge processor for real-time visual applications.”

You can watch the video of the product launch below.

The founder and CEO of StarFive, Thomas Xu, introduced StarFive’s new generation multimedia processor SoC – JH7110 in all respects. As a high-performance, low-power-consumption, and multi-functional SoC for RISC-V application, JH7110 adopts TSMC’s mature 28nm process technology and boasts a quad-core RISC-V high-performance CPU and 2 MB L2 cache. Its working frequency is up to 1.5 GHz. It is worth mentioning that JH7110 can work as a powerful multimedia processing platform thanks to its integration with 3D GPU, H.264/H.265 video codecs IP, and ISP IP. 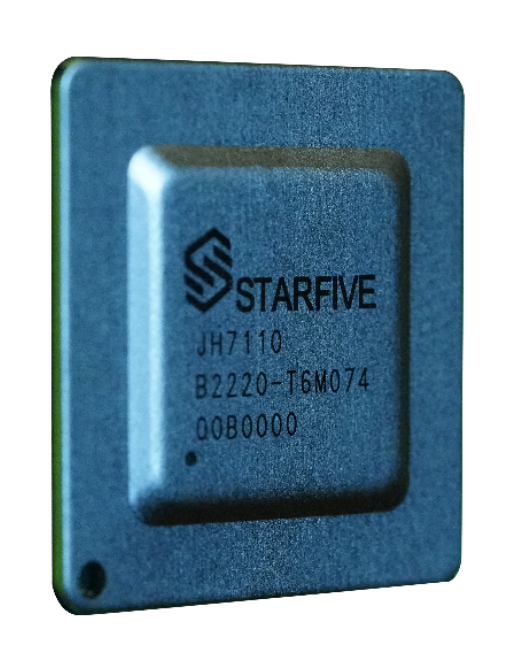 Based on silicon testing, JH7110 achieves a steady operating frequency of 1.5 GHz. Its CoreMark score is up to 5.09. JH7110 is proven to be the best mass-production high-performance RISC-V SoC. JH7110 provides greater GPU processing power. Under 400 MHz GPU operating frequency per Glmark2 benchmark, the measured performance specifications are more than 4 times better than those SoCsbenchmark on other SBCs.

As for power consumption, JH7110 is separated into 8 independent power domains. CPU frequency can be configured through software. To achieve a balanced PPA, customers can set the most optimum SoC frequency based on their application scenarios and performance requirements. In sleep mode, the static power consumption of JH7110 is 120 mW. When working on an SBC, with all the main modules under full load, the dynamic power consumption of JH7110 is 4,100 mW. In the application scenarios of soft routers and NAS, where you don’t need GPU and video processing, but only require the dual Ethernet port operation, you can configure the modules on/off through software. And the actual power consumption decreases to 3,300 mW.

Xu said, with its faster response and smoother image processing compared to other RISC-V processors, JH7110 can bring the best gaming experience to players. Even if you don’t play games, you can enjoy the seamless experience with common desktop environments, such as Debian and OpenHarmony.

Based on JH7110 SoC, StarFive released the world’s first high-performance, low-cost, and mass-production RISC-V SBC with an integrated 3D GPU—VisionFive 2. 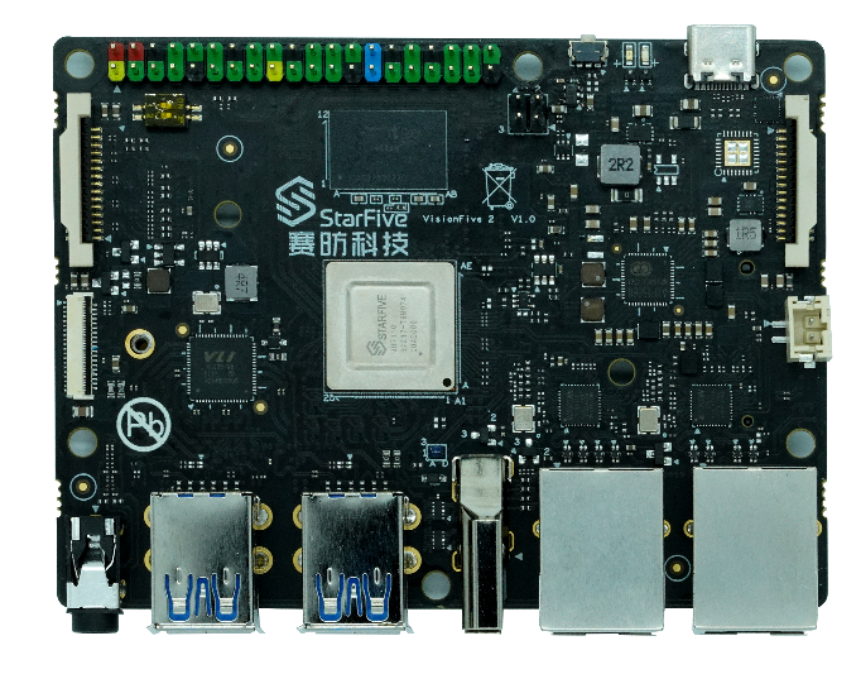 Compared with other RISC-V boards, VisionFive 2 boasts the highest performance and the most comprehensive functions. According to Xu, many Operating Systems have been ported to VisionFive, including the official Linux distributions of Ubuntu, Fedora, OpenSUSE, and Debian, and the community versions of ArchLinux, AltLinux, Gentoo, and Lubuntu. Besides, StarFive is working on OpenHarmony, Deepin, Ubuntu, Ukylin, and other systems. VisionFive has fully supported Python, Java, and other high-level languages, and also supports the ArkCompiler for JavaScript programming. They will soon come under the OpenHarmony system, facilitating the effective development of all kinds of applications.

Powerful performance, rich interfaces, and a robust software ecosystem enable the unlimited potential of VisionFive 2. In the field demo, VisionFive 2 performed 3D rendering and ran 3D games effortlessly while playing HD videos. The audience was attracted by the fascinating visual effect and amazed by its wide-range capabilities.

Three versions of VisionFive 2 are available: 2 GB, 4 GB, and 8 GB, which costs (tax excluded) 55 USD, 65 USD, and 85 USD, respectively. The price is close to that of the development boards in other architectures. What’s more, StarFive will embark on a 2-month crowdfunding campaign, offering up to a 25% discount.

VisionFive 2’s crowdfunding will be launched on Kickstarter, the world-famous crowdfunding Website. Log in to kickstarter.com and search “VisionFive 2” on the Homepage to learn more (https://www.kickstarter.com/projects/starfive/visionfive-2). If you have any questions, leave a message in the RVspace community (https://rvspace.org), and StarFive will support you in time.

“VisionFive 2 has filled the void for RISC-V high-performance board. We would like to call RISC-V fans and commercial customers around the world to experience and evaluate it at the most affordable price.” Xu said.

JH7110 has passed strict reliability tests and meets the commercial-grade and industrial-grade test standards, thus it can be widely used in consumer electronics and industrial control. At the press conference, Xu introduced the complete solutions of VDI and laptop based on JH7110. JH7110 perfectly supports remote desktop, supports dual-screen and three-screen displays, and well meets the needs of customers for VDI.

The powerful GPU and multimedia capabilities of JH7110 empower it to support the desktop OS. In this laptop solution developed and designed by StarFive and its partners, the laptop is powered by batteries, expands necessary communication peripherals through PCIe and USB, and supports a front camera and 2K LCD touch screen. These shape a set of competitive entry-level notebook computers solution.

Enabled by open source hardware, JH7110 continues to gain good graces. Not long ago, Pine64, an open source hardware manufacturer, announced the RISC-V SBC–Star64, a RISC-V SBC based on JH7110. It is reported that Star64 is equipped with 1 PCIe interface, 2 Gigabit Ethernet ports, GPIO, and USB 3.0 interfaces.

Zanmei Wang, general manager of Bipai Keji, said that JH7110 can bring more innovation and driving forces to the open community. What’s more, Banana Pi open community, based on JH7110, will launch a new generation of boards and work together with StarFive to build the software ecosystem.

In terms of the smart gas pipeline system and network security, StarFive and WINICSSEC, based on JH7110, will jointly develop industrial Internet security products with fully independent IPR. At present, this product is in field testing and will be promoted to cover urban gas. The product empowers Towngas Smart Energy to strengthen cyber security protection of the gas network, and consolidate data security for critical facilities.

Dan Xi, VP for Engineering Quality and Construction of Towngas, said that Towngas Smart Energy operates pipeline gas projects in more than 300 cities and towns across Mainland China, with more than 40 million customers. Applying JH7110 to the company’s industrial-grade cyber security system can ensure information security for its critical facility – the operation platform. The application strengthens the security level to realize a safe, reliable, and stable gas supply to ensure the implementation of smart gas projects.

Innovation drives industrial evolution. This may be a small step for StarFive, but it means a giant leap for the RISC-V world! The mass production of JH7110 and VisionFive 2 marks that RISC-V has taken a solid step towards high-performance applications, and provided a strong impetus for the development of RISC-V SoC.

Founded in 2018, StarFive is a Chinese local high-tech enterprise with independent intellectual properties. As the leader of the RISC-V software and hardware ecosystem in China, StarFive provides world-leading products and solutions on RISC-V covering CPU IP, SoC, and development boards, etc.

Since its establishment, StarFive delivered a number of RISC-V products: