By RISC-V Community NewsJanuary 20, 2023No Comments

T-Head made the Xuantie RISC-V series processors open-source and made a series of tools and system software available at the 2021 Apsara Conference. This was the first full-stack open-source of the series processors and basic software worldwide. T-Head strives to promote the maturity of RISC-V architecture and accelerate the fusion and development between RISC-V soft and hardware technologies.

We have received tremendous interests and positive feedback regarding the Open Xuantie project from the community during the past year. On the recent China National Computer Congress(CNCC) 2022, Pro. Jun Han from Fudan University demonstrated their latest achievement on DSA Agile development on Open Xuantie RISC-V processor. This is the first significant DSA realization on the Open Xuantie C910 core.

To further achieve agile development, we designed domain-specific core conveniently to be coupled to the RISC-V core with little change to the internal pipeline. We implemented an efficient DSA interface to bridge the communication and cooperation between the general-purpose and domain-specific cores, as shown in Fig. 1.

We have developed a demo of a DSA interface called Xuantie DSA Interface. It is designed based on the Open Xuantie C910 processor. The interface allows tight coupling between the domain-specific core and the Xuantie C910 core, efficiently supporting HW/SW co-design. 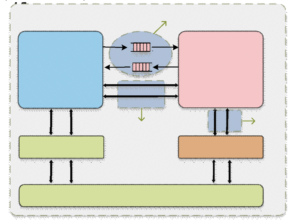 The command interface provides a command request and response channel. The domain-specific core can directly access register resources and instruction streams through this interface. The interaction between general purpose and domain specific cores can reach for low latency through the tight coupling. Moreover, full 32-bit instructions can be freely decoded by the latter for more information.

The L1 Cache access interface provides a pipelined channel for the access. The domain-specific core will provide information, such as virtual addresses, stored data, and memory access type to access the L1-Cache. In addition, the memory consistency issue will be guaranteed by the Load-Store Unit (LSU) of the Xuantie C910 core.

The L2 Cache access interface allows for a large-bandwidth memory access channel. The read and write channels are separated in order to be processed separately The domain-specific core can efficiently access large contiguous data by providing only address, data, byte count, etc.

Fig. 3. The architecture of the proposed domain-specific processor

Based on the proposed Xuantie DSA Interface, we design a domain-specific processor, as shown in Fig. 3.

The DSA design process starts with the profiling of target algorithms. From the profiling report, we then extract the performance bottleneck operations. In order to better exploit the data-level parallelism inherent in the algorithms, we reshape scalar-based kernel operations into matrix-based ones via 2-D data structure abstraction. Based on this design, we design a set of custom matrix instructions. We also implement a Crypto-core to perform these custom instructions coupling to the Xuantie C910 Core through the Xuantie DSA Interface.

The command interface is connected to the local Decoder unit in the Crypto-core. This part is responsible to accept and decode the custom instructions as well as return the corresponding response through the command interface. The memory access interface is driven by the Load/Store Control Unit to initial memory access requests and receive responses; the memory access address length is determined by the current custom instruction and CSR settings. To improve the memory access efficiency in this application scenario, we try both the L1 Cache and L2 Cache access interfaces; we find that the Crypto-core is more suitable to connect to the shared memory with the RISC-V Core through the L2 Cache access interface, as the polynomial, the main operation object, is stored in the array and distributed continuously in the memory. 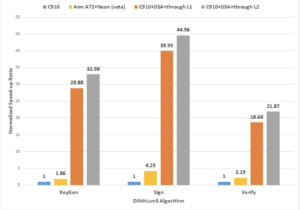 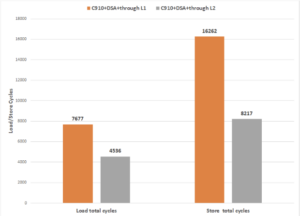 We present the cycle count results of implementing the Dilithium digital signature scheme on the proposed architecture in Fig. 4. Compared to the software baseline implementation running in scalar Xuantie C910 core, we propose that the DSA design achieves up to 44.56× improvement in performance. Compared to the state-of-the-art implementation in Arm A72 accelerated by Arm Neon SIMD extension, up to 17.73× acceleration is achieved by the proposed DSA. We additionally present the clock cycle count consumed by memory access in the Sign process of Dilithium-Ⅲ in Fig. 5. It can be seen that the L2 memory access interface is 1.69× and 1.98× faster than the L1 interface, respectively, performing memory Load and Store on large continuous data; we obtain about 10% overall performance gain by using L2 Cache access interface instead of the L1 interface.