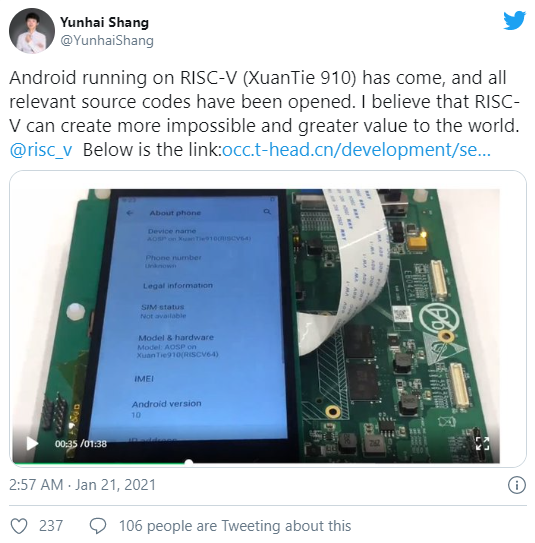 Alibaba-owned T-Head Semiconductor says it has ported Android 10 to its own RISC-V chips, highlighting increased momentum for the open-source instruction set architecture (ISA) against proprietary alternatives.

T-Head (also known as Pintouge, which translates to “honey badger”) this week demonstrated the open-source base of Android – known as AOSP – running on a prototype board powered by its own silicon. The configuration consists of three 64-bit RISC-V XuanTie C910 cores, each clocked at 1.2GHz with one supporting 128-bit vector instructions, all paired with an unspecified GPU core.

T-Head isn’t the only outfit interested in bringing Android to RISC-V. Last November, PLTC Labs, part of the Chinese Academy of Sciences, managed to get the Android kernel to boot in a virtualized environment. This wasn’t a full system, however, containing just the Android shell and not much else.

This time around, we’re shown something that more resembles a typical Android experience, with a full GUI and touchscreen interactions. And while this is merely a proof of concept, it could set the stage for future development by device makers and chip designers alike.